Be glad you (likely) work in technology. I spent a few minutes tonight poking around JetBlue's 2008 10-K filing. I was interested in distilling down a revenue-per-user (RPU) number for the airline. I have mentioned JetBlue unwittingly helping a domainer before. And while the new T5 at JFK is a giant step up in overall quality, execution, usability and plain old logic & reason compared to anything else at JFK, I whole-heartedly agree with Patrick Smith's T5 assessment on AskThePilot.
But back to the numbers:
$15,000 sounds pretty cheap to fuel up the plane, stock it with service items, get the people on-board, fly them somewhere, land, get all the people off, and pay the salaries of the gate agents and flight-crew - to say nothing of maintenance, depreciation, and capital costs.
Posted by Mathew Johnson at 7:44 PM 2 comments: 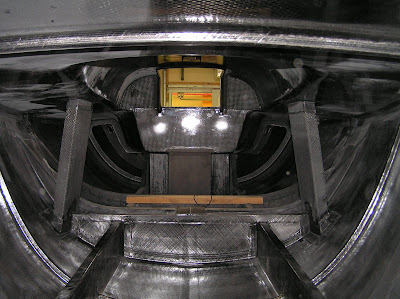 Posted by Mathew Johnson at 9:46 AM No comments:

Ad Of The Day: Toothless Alcoholic

Another datapoint to support my 'CPMs have really crashed' hypothesis: An ad on the NYT for the Toothless Alcoholic blog: 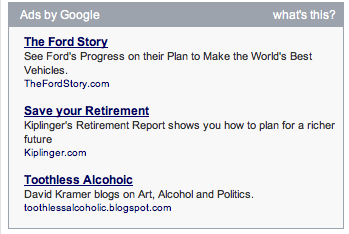 Posted by Mathew Johnson at 9:54 PM No comments:

You have a dog, and I have a cat. We agree that they are each worth a billion dollars. You sell me the dog for a billion, and I sell you the cat for a billion. Now we are no longer pet owners, but Icelandic banks, with a billion dollars in new assets. “They created fake capital by trading assets amongst themselves at inflated values,”

-Michael Lewis in Vanity Fair
Posted by Mathew Johnson at 11:14 AM No comments: